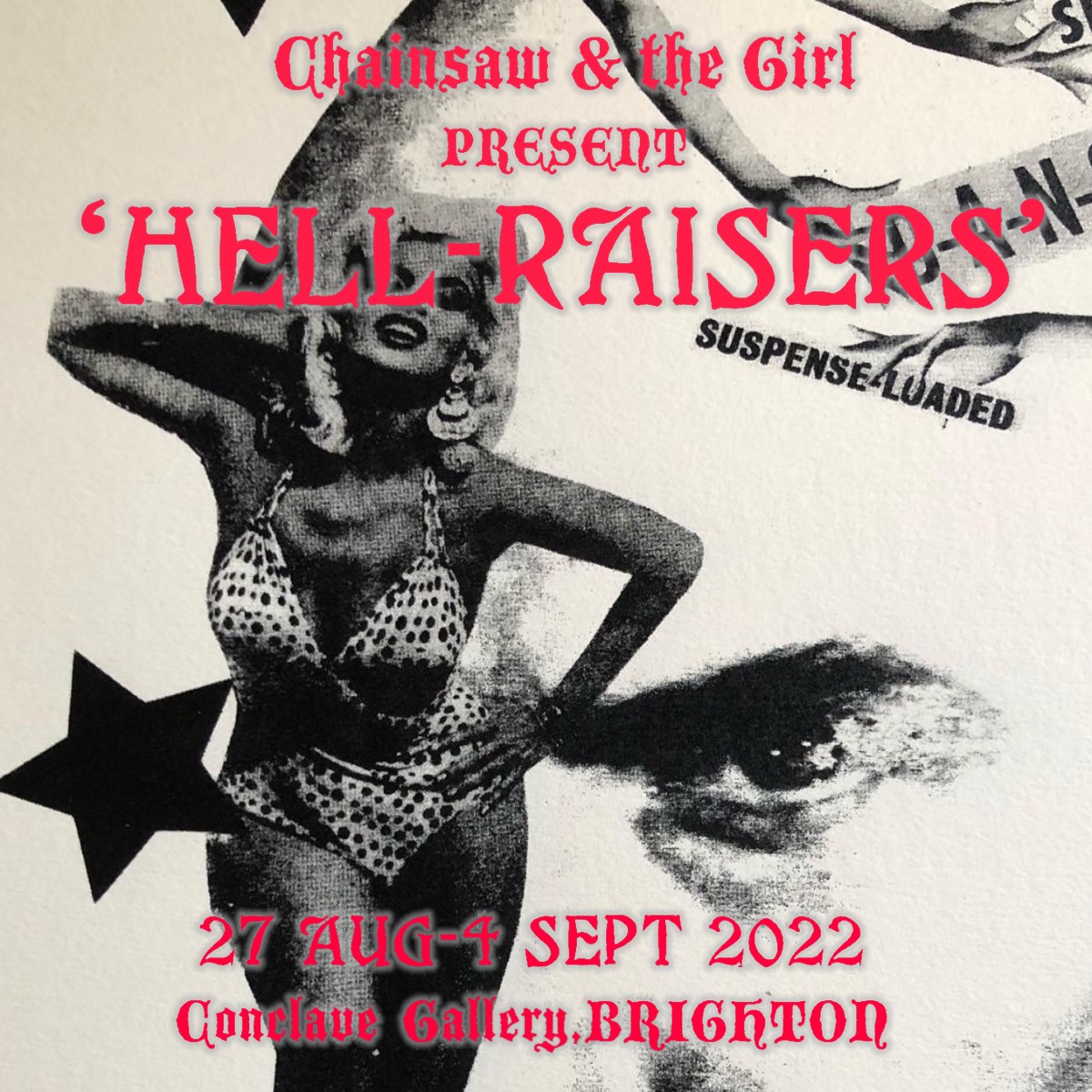 Chainsaw & THE GIRL is an ongoing collaboration between artists BILLY CHAINSAW and GIRL SH*T, one that explores their shared love of MUSIC, SUBCULTURE and MAGICK. For their latest show HELL-RAISERS they deliver both solo and collaborative artworks that embrace the incendiary nature of limitless, boundary pushing individuals.

CHAINSAW says:
“The original wave of punk rock changed my life, empowered and transformed me into a tenacious individual able to pursue my dreams and become all the things I’d ever dreamt of becoming (and more): personal assistant to Siouxsie and The Banshees from 1979-1996, journalist, film critic, adult-magazine editor, actor, experimental filmmaker, club MC, singer, and dark pop artist. Now felt the optimum time to delve into that inspirational aspect of my past. I was able to do so thanks to a friend from 1978, Ray Stevenson, the first photographer to document punk rock in the UK – particularly the hell-raising Sex Pistols. Ray generously allowed me access to his archives and granted me permission to create artworks using his photos.”

GIRL SH*T says:
“My interest in the notion of ‘Hell Raisers’ is seeped in subculture and popular culture. What is a ‘Hell Raiser’? Here’s where it gets interesting. At the core it’s about complete freedom, to be without personal boundaries or censorship. Like the perception of the ‘Rock God’, the ‘Hell Raiser’ is generally a man. Envied for his freedom and celebrated for his virility dressed as bad behaviour. Women are usually punished for similar traits yet our history is crammed full of revolutionary women looking for the same freedoms. In this work I seek to celebrate these women… they are all of us…”

BILLY CHAINSAW: “In my early teens I developed an obsession with American comic books, masks, the movies, magick, and author William S. Burroughs… elements that repeatedly feature in my mixed-media, cut up dark pop art.”

This website uses cookies to improve your experience while you navigate through the website. Out of these, the cookies that are categorized as necessary are stored on your browser as they are essential for the working of basic functionalities of the website. We also use third-party cookies that help us analyze and understand how you use this website. These cookies will be stored in your browser only with your consent. You also have the option to opt-out of these cookies. But opting out of some of these cookies may affect your browsing experience.
Necessary Always Enabled
Necessary cookies are absolutely essential for the website to function properly. This category only includes cookies that ensures basic functionalities and security features of the website. These cookies do not store any personal information.
Non-necessary
Any cookies that may not be particularly necessary for the website to function and is used specifically to collect user personal data via analytics, ads, other embedded contents are termed as non-necessary cookies. It is mandatory to procure user consent prior to running these cookies on your website.
SAVE & ACCEPT